English bulldogs have been in the spotlight of authorities and media for a long time. The breed has a striking appearance and is often mentioned when health issues in pedigree dogs related to their appearance are discussed. With this background and as a starting point the Swedish Kennel Club in collaboration with the Swedish Club for English bulldogs have recently launched a new breeding strategy for the breed. The strategy presents hands on advice for breeders on how to make visible progress over the coming five year period by focusing on the main health issues associated with the breed.

The English Bulldog population has, for many years, been known to be over represented regarding several health issues. The Swedish breed club (in cooperation with the Swedish University of Agricultural Sciences, SLU) has conducted several health surveys and various solutions to the apparent problems have been proposed. For instance a project focusing on evaluation of the trachea by radiological examinations was initiated a few years ago Unfortunately this project resulted in the finding that the method used was unreliable for screening purposes (Ingman et al. 2014). Over the years the health situation has been monitored, yet no improvements in the breeds overall health situation have been visible. 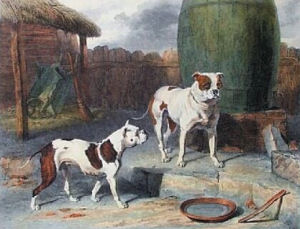 In 2013, the Swedish Kennel Club (SKK) launched a project with the aim of improving the health of English bulldogs in Sweden. A working group consisting of representatives from the Swedish Kennel Club, the Swedish breed club (Svenska klubben för engelsk  bulldogg, SKEB) and the Swedish University of Agricultural Sciences (SLU) was formed. The group benefited from the various backgrounds of the group members: veterinarians, geneticists, dog show judges and breeders of English bulldogs were represented in the group.

The main goal of the working group has been to improve the breed’s health by working out a breed specific breeding strategy that can help breeders achieve this goal.

The first task of the group was finding out facts about the current situation of the breed in Sweden and worldwide. The population structure was studied using the SKK Avelsdata (an online service presenting breed specific data registered with the SKK). A health survey was conducted by SLU in collaboration with the breed club and insurance data were collected from all main insurance companies in Sweden. Efforts were also made to find information about similar projects in other countries and collect information about relevant research projects.

When all the collected information was summarized the working group concluded that breathing problems had to be considered the main issue to be addressed in the breeding strategy. The prevalence of breathing problems of various degrees is strikingly high and the impact of the problem on the dogs wellbeing, and in severe cases the mortality of the dogs, is paramount. As breeding for several goals at a time results in a slower progress rate the group chose to focus mainly on improvements in breathing. This does not mean that other health issues present in the breed should be ignored.

The different backgrounds of the participants in the working group were, as mentioned earlier, an asset to the project. However the same fact also led to different opinions within the group on how to best deal with the challenges the breed is facing. In spite of those differences the group managed, after thorough discussions, to agree on a breeding strategy focusing primary on decreasing breathing problems, and problems with regulation of body temperature. The breeding strategy states that dogs with breathing difficulties of any sort and dogs with stenotic nares are to be excluded from breeding. Moreover, dogs with a muzzle/upper jaw that is shorter than the minimum measure in the breed standard should not be used for breeding. Dogs with a muzzle/upper jaw that, with margin exceeds the minimum measure described in the breed standard are to be promoted in breeding. These recommendations reflect the fact that the structures within the dogs’ muzzle/upper jaw connected to breathing requires adequate space to allow the dog to breath and control its body temperature without effort.The breeding strategy also suggests the creation of a breed specific health assessment, primarily for breeding animals, to be performed by a veterinarian.

The breeding strategy will be in use for the next five years when it is due for revision again. At that point we hope to find less very short muzzles and a decrease of breathing problems in the Swedish population of English bulldogs.

There are several other projects around the world focusing on English bulldog health. The main goals are similar, yet the means to achieve those goals differ between countries. Our belief is that there are many ways to improve the health of the breed and we look forward to take part of future results in the different projects.

Below is a translation of the section of the breeding strategy that contain hands on breeding advice:
Health issues must be the primary focus of every breeding decision.
As a breeder of English bulldogs you are expected to contribute to the knowledge of the current health situation by filling out the breed clubs breeder’s survey for every litter you produce.
Problem free breathing is top priority.

Choose dogs for breeding that:

Choose an older male rather than a young when given the option. An older male have had the chance to develop any heritable traits that a younger male might not yet show clinical signs of and is therefore easier to evaluate accurately. If the male has been used for breeding before it is also possible to evaluate the health status of the offspring. Hence, you know, to a greater extent, what you get when you choose an older male instead of a younger, and thus reduce the risk of spreading any heritable disease traits to the offspring.

Do not breed dogs that:

Questions
If you have any questions about the project and/or the breeding strategy you are welcome to contact Helena Skarp (helena.skarp@skk.se) at the SKK Department for Breeding and Health.