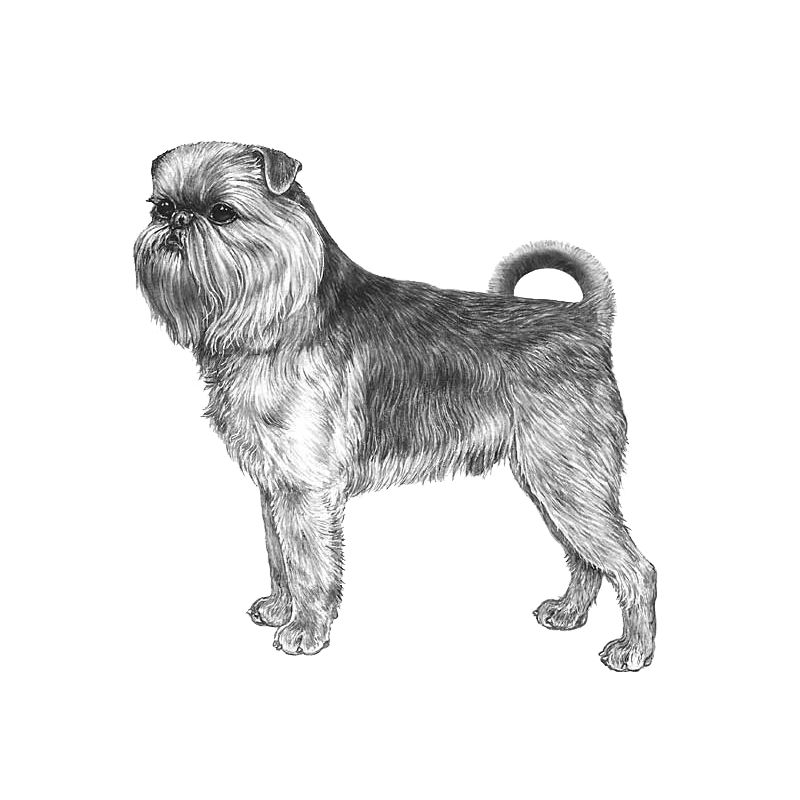 At one time known as the Belgian street urchin, this breed originated in Belgium and has traces of Affenpinscher in its ancestry. A variety of this little dog appeared in a painting by the Flemish artist Jan van Eyck as long ago as 1434 and the breed was already standard in type by the 1600s. He used to earn his keep as a stable dog where horses for hansom cabs were kept. He arrived in Britain in the late 1800s.

There are numerous breed standards. The basis of breed/conformation shows is the judging of pedigree dogs against the 'Breed Standard', which is a picture in words that describes the range of features that are deemed appropriate for the breed.

The Kennel Club: Population Analysis of the Griffon Bruxellois breed

2) Sweden: Breed-specific Breeding Strategies: (in Swedish) and/ or English summary

Areas of risk are:
1.    Breathing: Problems caused by insufficient room in throat cavities and/or ribcage and/ or pinched nostrils.
2.    Face: Overly short muzzle can give rise to eye injuries.
3.    Movement: A deviant pattern of movement with frantic scratching behaviour and signs of unmotivated pain when on leash may indicate a serious neurological disorder, sy- ringomyelia.

Particular attention must be paid to breathing, nose and sound eyes as well as the pat- tern of movement.

Abstract: "This study aimed to develop a system of quantitative analysis of canine Chiari-like malformation and syringomyelia on variable quality MRI. We made a series of measurements from magnetic resonance DICOM images from Griffon Bruxellois dogs with and without Chiari-like malformation and syringomyelia and identified several significant variables. We found that in the Griffon Bruxellois dog, Chiari-like malformation is characterized by an apparent shortening of the entire cranial base and possibly by increased proximity of the atlas to the occiput. As a compensatory change, there appears to be an increased height of the rostral cranial cavity with lengthening of the dorsal cranial vault and considerable reorganization of the brain parenchyma including ventral deviation of the olfactory bulbs and rostral invagination of the cerebellum under the occipital lobes."

University of Surrey: Investigating the pathogenesis, diagnosis, and treatment and genetic cause of canine Chiari Malformation and syringomyelia.