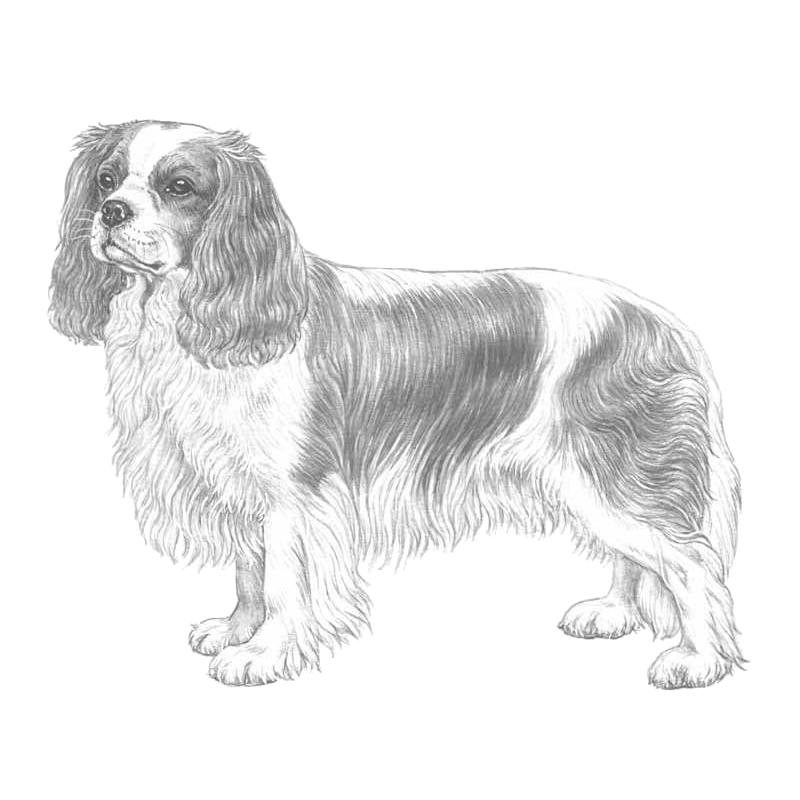 The Cavalier King Charles Spaniel is a small spaniel classed as a toy dog by The Kennel Club and the American Kennel Club. 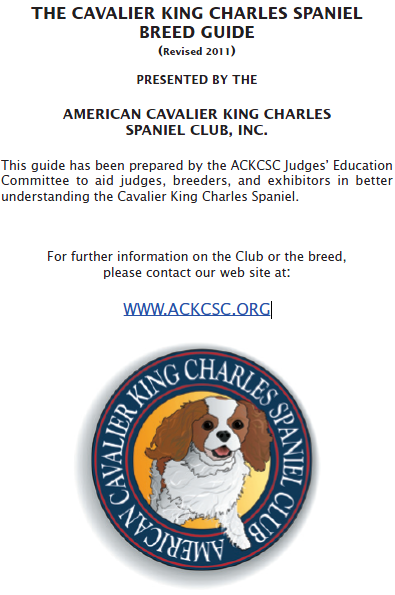 THE CAVALIER KING CHARLES SPANIEL BREED GUIDE (Revised 2011)
PRESENTED BY THE AMERICAN CAVALIER KING CHARLES SPANIEL CLUB, INC.
This guide has been prepared by the ACKCSC Judges’ Education Committee to aid judges, breeders, and exhibitors in better understanding the Cavalier King Charles Spaniel. For further information on the Club or the breed, please contact our web site at: https://www.ackcsc.org

This breed has information on Veterinary Care and Life Insurance.
Click here to view downloads

"The 2013 Cavalier Health Survey: We received a total of 5559 returns, 326 by paper and 5233 electronically via the Internet, from 38 different countries. The returns were divided into four regions and individual reports have been produced for each region:

Articles on DogWellNet that address the specific breed's health, welfare, issues, and conditions: 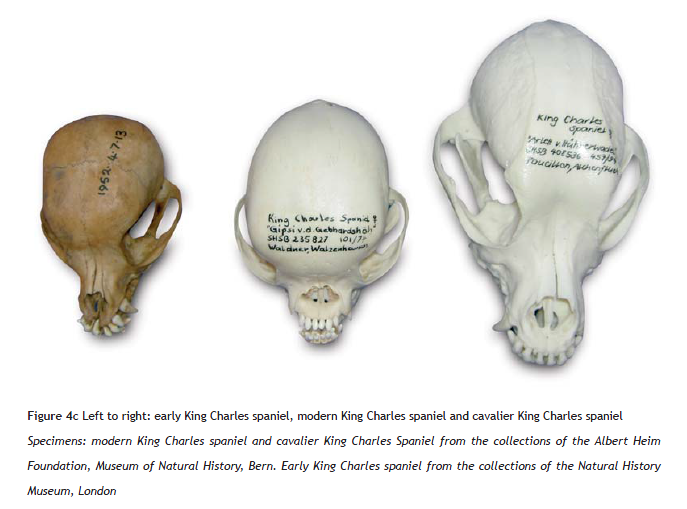 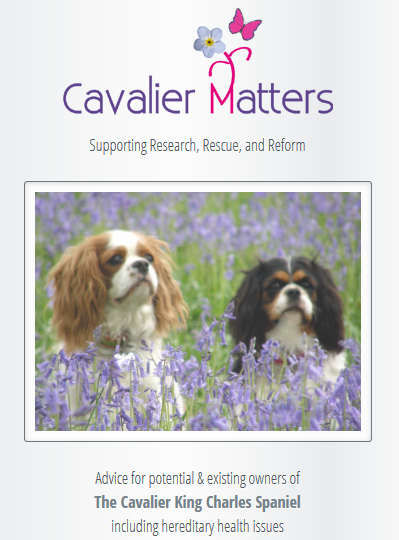 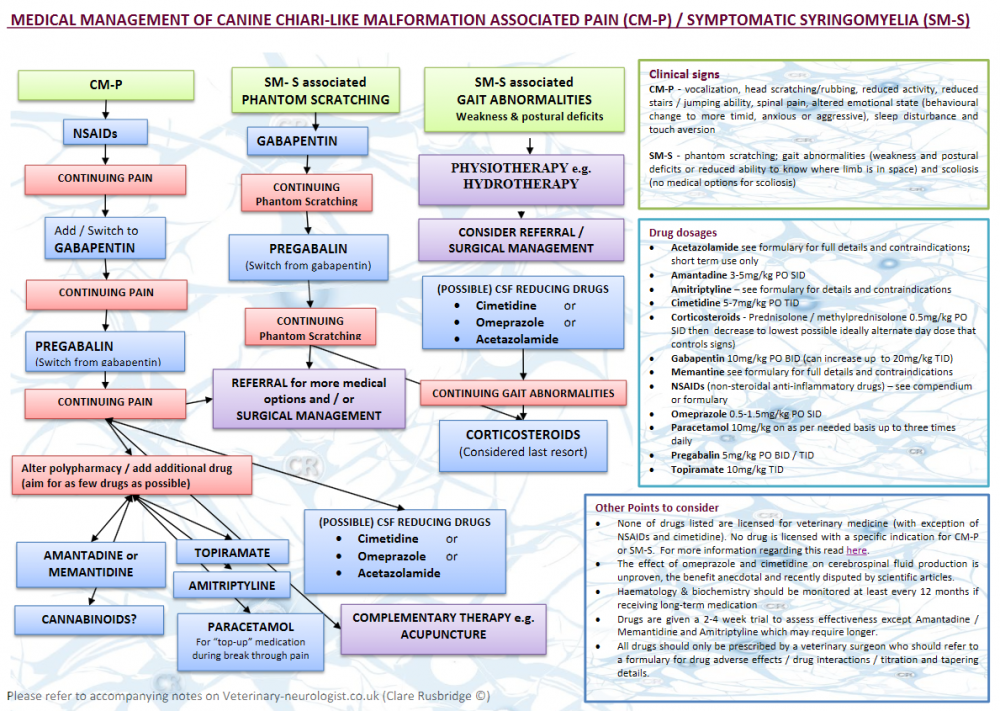 Syringomyelia: determining risk and protective factors in the conformation of the Cavalier King Charles Spaniel dog

Use of Morphometric Mapping to Characterise Symptomatic Chiari-Like Malformation, Secondary Syringomyelia and Associated Brachycephaly in the Cavalier King Charles Spaniel.

Figure 5. Diagram of the bones referred in text (lower jaw not illustrated) with arrows to indicate anatomical changes in dogs with CM. The green colored bones are endochondral in origin (neurocranium of skull and notochord in axial skeleton). Calvaria and facial bones have membranous ossification (viscerocranium). Sclerotomal occipital region bones (i.e., craniocervical junction) indicated by red border. Purple line indicates the skull base. In dog and man, interparietal and supraoccipital fuse (yellow arrow). The reduced volume of the caudal fossa in CM is indicated by the blue arrows: reduction of the supraoccipital and dorsal displacement of atlas and axis; premature closure of synchondroses of bones in skull base (blue*) shortening the skull base and compensatory increase in height of the parietal bone and frontal bone (red arrows).

The phenotypes of brachycephaly have considerable variation between dog breeds and consequently Brachycephalic obstructive airway syndrome (BOAS) also has variation between individual breeds and presents with different phenotypes and severity, for example, nostril obstruction in Pugs, French Bulldogs and Bulldogs (80). In these respects CM/SM can be considered comparable to BOAS i.e., a Brachycephalic obstructive CSF channel syndrome (BOCCS). Similarly to BOAS and the airway, BOCCS can be considered any distortion of the skull and/or craniocervical junction that compromises the neural parenchyma and CSF circulation causing pain and/or SM with variation between breeds and individuals.

This review reflects the key morphogenetic processes involved in CM/SM and how they relate to the most recent research findings for these conditions with respect to brachycephaly, craniocervical junction abnormalities and diagnosis but highlighting the need for further investigation.

Understanding the developmental origins of complex three dimensional structures of the brain, skull, craniocervical junction and spinal cord with associated ventricles and CSF channels, is crucial to understanding canine CM and ultimately the pathogenesis of SM. The molecular genetics that underlay CM/SM can provide a powerful tool to elucidate such an understanding. However, the challenge is finding appropriate genetic markers that can achieve this, which is confounded by not having readily quantifiable pathogenic phenotypic features to study. The importance of accurate phenotyping has been fundamental for genetic studies of CM, but it is also the key for accurate diagnosis (14, 15). The complexity of the existing morphometrics involved in the current phenotypes make them impractical for everyday use and a machine learning technique for diagnosis that removes human bias has been suggested (150). Pilot studies in this technology has identified biomarkers in structures such as the soft palate not previously associated with these conditions that when investigated may give further insight into conformation change. Mathematical modeling has also been applied to the dynamics associated with CSF flow which might be used to predict the outcome following different surgical approaches (151). The challenge of quantifying and interpreting intermittent and variable clinical signs for a complex trait such as CM/SM cannot be overstated. More investigation is required to defining the pathology of symptomatic CM and its relationship with brachycephaly and miniaturization. This priority for future research can make a considerable and direct impact on dog welfare.

The genetic investigation for canine CM/SM has been carried out in conjunction with human studies and it reaffirms how “Man and his Dog” have an enduring partnership. The progress made has been with the whole-hearted co-operation of breeders and pet owners supporting human sufferers of CM/SM under the umbrella “One Health.”

This pilot study "aimed to find out if it is possible to identify risk of CM/SM in a dog’s head shape through evaluation with the eye alone by breed experts. The advantage of this approach is that it offers an opportunity to deduce the risk of CM/SM by providing an additional tool for breeding selection (without the need for equipment such as calipers) to improve dog welfare and enables both the veterinarian profession and breeders to share their expertise in a unique manner. " "CM and SM can only be determined by MRI, which is an expensive test which requires anaesthesia. Determining external conformation features which can be easily measured and which do not require veterinary intervention is an advantage to dog breeders and therefore for dog welfare."

"This study investigated, for the first time, the opinions of adjudicators who are experts in the art of assessing dog conformation with quantitative assessment. It explored the concept that the head conformation of CKCS had evolved over the hundred years since first registered with the KC with the use of the vocabulary for describing the head shape into two groups as ‘traditional versus modern-type’ by panellists and ‘moderate versus exaggerated’ by Toy Breed judges. The hypothesis that head conformation (dysmorphic features) could be assessed visually was shown to be possible but any correlation with risk of SM in the CKCS was inconclusive in this small sample study. The results suggest there was sufficient association between the judicators’ assessment and the risk of SM to propose a larger study."