The Newfoundland is a large working dog. Newfoundlands can be black, brown, white and black (called Landseer) or gray. However, in Canada, the country of their origin, the only correct colours are black (including black with white markings) and white and black (Landseer).

See: The German Kennel Club (VDH) for information and video (if available).
(Hint: your browser should be able to Translate to English, at least for text (e.g., right click in Google Chrome or Internet Explorer).) 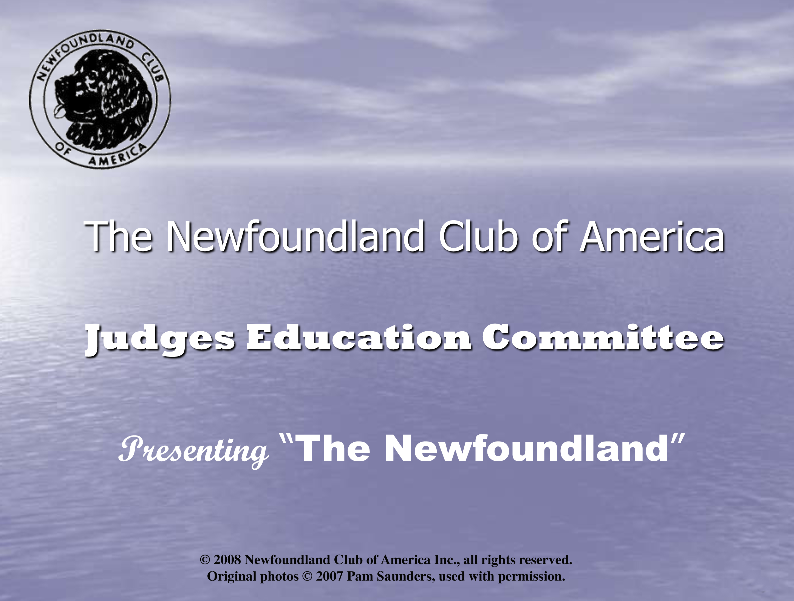 Many articles and historical information on the breed

This breed has information on Veterinary Care and Life Insurance.
Click here to view downloads
2. Finland: Database Records: http://jalostus.kennelliitto.fi/frmEtusivu.aspx?R=50
3. UK: Newfoundland Health Database:  supported by Newfoundland Clubs in the UK: http://www.newfoundlandhealthdata.org.uk/
The database is open to ALL Newfoundland owners, breeders and enthusiasts in the UK and worldwide. It is free to view.
Breeding/Health Strategy Documents:

The Kennel Club list of DNA tests available for each breed along with an indication as to whether the test is part of the Assured Breeder Scheme (recommended or required) and whether it is recorded on the Kennel Club registration database: http://www.dogwellnet.com/content/health-and-breeding/screening-tests/dna/dna-tests-for-use-in-breeding-decisions/the-kennel-club-breed-specific-dna-tests-upd-r234

Newfoundland Club of America: 10/15/09:
Board approves the amended wording for the Breeding Stock Health Testing statement.  The statement would read: “Breeding Stock Health Testing: The Newfoundland Club of America considers it necessary to test all breeding stock for the following: hips (x-ray), elbows (x-ray), heart (cardiologist) and cystinuria (DNA or parentage).  The NCA also strongly recommends testing, where indicated, for thyroid, eyes and patellas.  All test results should be available in a publicly accessible database.


The USA (AKC) recognizes both European and American Newfoundland Landseers but does not recognize the 3rd version, the Landseer ECT, as a version of the Newfoundland or even as a breed.

The Newfoundland Club of America addresses the question: "What is an ECT?


ECT stands for "European Continental Type". ECT's or Landseer ECT's as they are sometimes called, resemble Landseers, but are different in type and temperament. An ECT is a little taller, a little less broad, and to the person familiar with Newfs, just looks "different" than a Newf. ECT's tend to have a more "active" personality, and require an owner ready to live with a large dog which is more assertive than a typical Newf."

"As of 1998, Every country except the U.S. and Canada recognize the ECT as a separate breed from the Newfoundland."

Naively I had thought that about five years ago when the whole issue of the European Continental Type Landseer exploded in the U.S. and to a lesser extent, here in Canada, the matter was settled once and for all. However I forgot that the global village applies to dogs as well as everything else.

This new breed, usually referred to as the ECT Landseer, according to one version, got started in 1918, with the cross breeding of a Kuvasz and a white & black Newfoundland. However, The International Encyclopedia of Dogs by Anne Rogers Clark & Andrew H. Brace, Howell, 1995 claims: “The Landseer was developed in Germany and Switzerland. During the 1930’s, breeders in these countries started a breeding program by crossing black-and-white Newfoundlands with Pyrenean Mountain Dogs.”

Whatever the actual origin, the goal apparently was to produce or retain the white and black dog that Sir Edwin Landseer had painted in England in the first part of the 19th century. It was most unfortunate that the name chosen for this new breed was the traditional name given to white and black Newfs. However the international governing body for dogs, the Federation Cynologique Internationale (FCI) recognized the new breed in 1960 with the name Landseer.

There are many claims that ECT Landseers have been registered as Newfs in the U.S. and possibly in Canada and some even go so far as to claim that most Newfs today are related to the founding cross-breedings of the ECT Landseer. The probability is that at least some of the genes snuck in to our Newfoundland breeding programs, but certainly not enough to adversely affect our breed.

To close the door on any further incursions, the Newfoundland Club of America alerted the American Kennel Club and the Newfoundland Dog Club of Canada advised the Canadian Kennel Club. Assurances were received from both national registering bodies. However, until there is unanimous international agreement, confusion is bound to remain.