This article provides a follow-up to the 2016 event - with a focus on addressing Dermoid Sinus in Rhodesian Ridgebacks.

The congress was a great success with a full day focused on breed health.

A whole chapter was focused on Dermoid Sinus, the only breed specific disease for Ridgebacks.

Helle Lauridsen writes... on the topic...

"Dermoid Sinus has been seen by the outside world as a huge problem, but much less so by Rhodesian Ridgeback breeders...

"At the congress it was decided by the delegates to counter the 'stories' about Dermoid Sinus with facts. While the German clubs are progressing towards funding a DS DNA study, the RRWC Health committee wanted to investigate the size and development of the problem, before moving forward  initiating a research project into the correlation of the 1996 Australian Folic Acid Study by Felicity A. Nicholls-Grzemski. Her theory is that as DS in dogs and spina bifida in humans are both embryo neural tube defects; DS can also be easily prevented with Folic Acid as Spina Bifida is prevented in humans.

The Ridge on the back of the Rhodesian Ridgeback is the hallmark of the breed, but unfortunately the genes for the ridge can also cause the congenital neural tube defect known as dermoid sinus ( Duplication of FGF3, FGF4, FGF19 and ORAOV1 causes hair ridge and predisposition to dermoid sinus in Ridgeback dogs., Hillbertz N, Nature genetics,2007 vol: 39 (11) pp: 1318-1320)  . However, as the Nature Genetics article title indicates, the ridgegene only causes PREDISPOSITION to dermoid sinus.

An Australian Folic Article study from 1996 (by Roberts J., and A. Nicholls-Grzemski - A Role for Folic Acid in the Prevention of Dermoid Sinus in the Rhodesian Ridgeback) shows correlation with the intake of Folic Acid and the occurrence of DS. Since then many breeders have been supplementing their bitches, and commercial food brands have added folic acid to their formulas.

At the 2016 congress the RRWC Health Committee was tasked to fully investigate the correlation between nutrition and Dermoid Sinus. The first step was to investigate the prevalence and development of the disease; and the results are heartening, the percentage of DS puppies has fallen from 4,5% to less than 1,5% in the last 10 years. 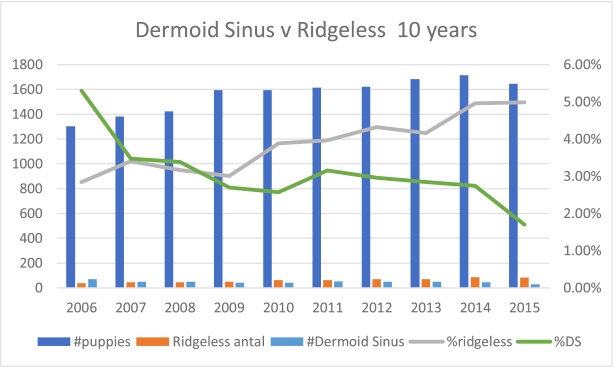 Several Presentations from the RRWC are available at: http://www.nordicrrwc.org/rrwc-2016/program
Currently (5-3-2016) available presentations include: