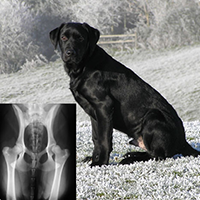 Here we provide resources and documentation that pertains to the use of Estimated Breeding Values (EBVs) in selection of dogs used for breeding.


"EBVs communicate the genetic risk of hip/elbow score for individual dogs in reference to the entire breed. They can be compared to determine which breeding animals have a higher or lower genetic risk, a risk which will be inherited by their offspring/progeny.

EBVs are computed using available hip and/or elbow scores for the dog and all its relatives. Pedigree information is used to determine the relationships among all dogs therein. This allows the genetic risk of individuals to be evaluated, stripping away any environmental effects on the scores, which is important since only genes are inherited over generations. Using EBVs to make mating decisions will be more accurate than using the observed hip or elbow score and will lead to faster progress in reducing the prevalence of disease."

"Hip (HD) and Elbow Dysplasia (ED) are two common complex developmental disorders of dogs. In order to decrease their prevalence and severity, the Orthopedic Foundation for Animals (OFA) has a voluntary registry of canine hip and elbow conformation certified by boarded radiologists. However, the voluntarily reports have been severely biased against exposing dogs with problems, especially at beginning period. Fluctuated by additional influential factors such as age, the published raw scores barely showed trends of improvement. In this study, we used multiple-trait mixed model to simultaneously adjust these factors and incorporate pedigree to derive Estimated Breeding Values (EBV). A total of 1,264,422 dogs from 74 breeds were evaluated for EBVs from 760,455 hip scores and 135,409 elbow scores. These EBVs have substantially recovered the reporting bias and the other influences. Clear and steady trends of genetic improvement were observed over the 40 years since 1970. The total genetic improvements were 16.4% and 1.1% of the phenotypic standard deviation for HD and ED, respectively. The incidences of dysplasia were 0.83% and 2.08%, and the heritabilities were estimated as 0.22 and 0.17 for hip and elbow scores, respectively. The genetic correlation between them was 0.12. We conclude that EBV is more effective than reporting raw phenotype. The weak genetic correlation suggested that selection based on hip scores would also slightly improve elbow scores but it is necessary to allocate effort toward improvement of elbow scores alone."


"Breeding values derived from OFA Hip and Elbow scores and pedigrees
Here we provide an opportunity to improve selection and heath of pure breed dogs, for breeding and purchasing, based on their genetic potential for good hip and elbow conformation. The estimated breeding values we provide were derived from statistical models that combine pedigree relationships with Orthopedic Foundation for Animals (OFA) Hip and Elbow Scores, all of which are available in the public OFA Database (OFFA.org). Major beneficiaries will be dog breeders, buyers, pet owners, veterinarians, and researchers who seek an accurate measurement of hip and elbow quality of a dog based on its genetic value for the two traits, but who have no way to access that information."


Abstract
"Background: Hip dysplasia remains one of the most serious hereditary diseases occurring in dogs despite long-standing evaluation schemes designed to aid selection for healthy joints. Many researchers have recommended the use of estimated breeding values (EBV) to improve the rate of genetic progress from selection against hip and elbow dysplasia (another common developmental orthopaedic disorder), but few have empirically quantified the benefits of their use. This study aimed to both determine recent genetic trends in hip and elbow dysplasia, and evaluate the potential improvements in response to selection that publication of EBV for such diseases would provide, across a wide range of pure-bred dog breeds.
Results: The genetic trend with respect to hip and elbow condition due to phenotypic selection had improved in all breeds, except the Siberian Husky. However, derived selection intensities are extremely weak, equivalent to excluding less than a maximum of 18% of the highest risk animals from breeding. EBV for hip and elbow score were predicted to be on average between 1.16 and 1.34 times more accurate than selection on individual or both parental phenotypes. Additionally, compared to the proportion of juvenile animals with both parental phenotypes, the proportion with EBV of a greater accuracy than selection on such phenotypes increased by up to 3-fold for hip score and up to 13-fold for elbow score.
Conclusions: EBV are shown to be both more accurate and abundant than phenotype, providing more reliable information on the genetic risk of disease for a greater proportion of the population. Because the accuracy of selection is directly related to genetic progress, use of EBV can be expected to benefit selection for the improvement of canine health and welfare. Public availability of EBV for hip score for the fifteen breeds included in this study will provide information on the genetic risk of disease in nearly a third of all dogs annually registered by the UK Kennel Club, with in excess of a quarter having an EBV for elbow score as well."

excerpts from the study...

"This analysis of data from canine hip and elbow dysplasia screening schemes in the UK has demonstrated improvements in participation, phenotypic parameters and/or genetic trends for all breeds considered. Generally, greater progress was observed with respect to hip scores than elbow grades. The largest improvements in hip score data were observed in NEWF, which initially had the highest (poorest) scores. For some of the very popular breeds, for which hip dysplasia is a recognized problem (LR, GR, GSD), steady improvement was observed. In general, the changes observed in elbow grade parameters were less consistent and smaller although there were general increases detected in participation across breeds and an improving genetic trend was detected in five of the six breeds included. However, the genetic trend as determined by elbow grade EBVs was comparable with that for hip score in ROTT and exceeded it in BMD, perhaps revealing selection priorities of breeders."

Frequency of canine hip and elbow dysplasia decreasing in Finland

Swedish Experiences From 60 Years of Screening and Breeding Programs for Hip Dysplasia—Research, Success, and Challenges

Further decreasing the prevalence of HD in populations that are already on mandatory phenotypic screening and even mostly free from any signs of HD calls for more refined selection tools. Estimated breeding values (EBVs) for many breeds have therefore gradually been introduced in Sweden since 2012 (13). Each dog's EBV is calculated by linking pedigree information with data from the registrations of hip status, allowing the genetic risk to be calculated for every individual in the pedigree. EBVs are computerized and updated every week currently (2020-01-01; https://hundar.skk.se/avelsdata/Initial.aspx) for 44 breeds. Also the possibility of combining data for international genetic evaluation has been outlined (10, 18, 19)."


Author: Carol Beuchat PhD
"EBVs ARE coming to dog breeding, and they will be the most useful and powerful tool breeders have ever had to improve dogs through selection. Start learning about them so you can make the best use of them in your breeding program."

A practical presentation to introduce breeders to use of EBVs.