The Brachycephalic Issue: Evidence and Efforts 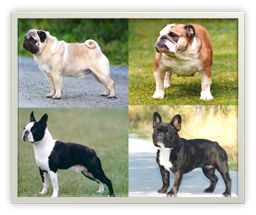 Continuing our series on The Brachycephalic Issue:

Today Rowena Packer and others have published the following study: Impact of Facial Conformation on Canine Health: Brachycephalic Obstructive Airway Syndrome  (Rowena M. A. Packer, Anke Hendricks, Michael S. Tivers, Charlotte C. Burn; [PLOS] Published: October 28, 2015   DOI: 10.1371/journal.pone.0137496 ).  The study concludes that shorter muzzles are associated with increased risk of health problems (Brachycephalic Airway Sydrome), even within affected breeds and offers a good discussion of practical implications and recommendations.  As you will see at the end of the abstract (below), the authors suggest that "breeding organisations should actively discourage exaggeration of this high-risk conformation in breed standards and the show ring."

Numerous articles on DogWellNet.com outline work that has been ongoing by some of our Partner organizations, e.g. the Breed Specific Instructions program (e.g., Swedish, Finnish and Norwegian Kennel Clubs); Finland Pug Study; work in Germany by the French Bulldog club and efforts by The Kennel Club in the UK, including Breed Watch.  We are in the process of assembling a further catalog of efforts in this area.

IPFD and DogWellNet.com will continue to compile and share resources on/for:

The study by Packer, et al. is timely and important.  DogWellNet.com will be compiling and commenting further on this and similar research, in an effort to continue to assemble evidence pertinent to the Brachycephalic Issue.

This image, from their study shows not only how they measured but also the extreme variation of muzzle length in 3 breeds.

The domestic dog may be the most morphologically diverse terrestrial mammalian species known to man; pedigree dogs are artificially selected for extreme aesthetics dictated by formal Breed Standards, and breed-related disorders linked to conformation are ubiquitous and diverse. Brachycephaly–foreshortening of the facial skeleton–is a discrete mutation that has been selected for in many popular dog breeds e.g. the Bulldog, Pug, and French Bulldog. A chronic, debilitating respiratory syndrome, whereby soft tissue blocks the airways, predominantly affects dogs with this conformation, and thus is labelled Brachycephalic Obstructive Airway Syndrome (BOAS). Despite the name of the syndrome, scientific evidence quantitatively linking brachycephaly with BOAS is lacking, but it could aid efforts to select for healthier conformations. Here we show, in (1) an exploratory study of 700 dogs of diverse breeds and conformations, and (2) a confirmatory study of 154 brachycephalic dogs, that BOAS risk increases sharply in a non-linear manner as relative muzzle length shortens. BOAS only occurred in dogs whose muzzles comprised less than half their cranial lengths. Thicker neck girths also increased BOAS risk in both populations: a risk factor for human sleep apnoea and not previously realised in dogs; and obesity was found to further increase BOAS risk. This study provides evidence that breeding for brachycephaly leads to an increased risk of BOAS in dogs, with risk increasing as the morphology becomes more exaggerated. As such, dog breeders and buyers should be aware of this risk when selecting dogs, and breeding organisations should actively discourage exaggeration of this high-risk conformation in breed standards and the show ring.