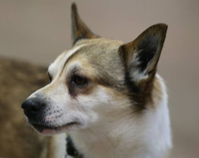 Some of this work was described at the 2nd International Dog Health Workshop by Prof. JT Epplen, one of the authors.

Although unique in many ways, the situation in the Lundehund is one to be considered thoughtfully by all in the dog breeding world.
This is an ancient breed - first developed 5 centuries ago - and it is now endangered.

See a few excerpts from the research paper below:

"Abstract
The Norwegian Lundehund breed of dog has undergone a severe loss of genetic diversity as a result of inbreeding and epizootics of canine distemper. As a consequence, the breed is extremely homogeneous and accurate sex identiﬁcation is not always possible by standard screening of
X-chromosomal loci. To improve our genetic understanding of the breed we genotyped 17 individuals using a genome-wide array of 170 000 single nucleotide polymorphisms (SNPs). Standard analyses based on expected homozygosity of X-chromosomal loci failed in assigning individuals to the correct sex, as determined initially by physical examination and conﬁrmed with the Y-chromosomal marker, amelogenin. This demonstrates that identiﬁcation of sex using standard SNP assays can be erroneous in highly inbred individuals.

"The Norwegian Lundehund is an endangered small Spitz breed which has gone through at least 2 known severe genetic bottlenecks
(Melis et al. 2013). It was developed to hunt pufﬁns (Fratercula arctica) on steep cliffs in Northern Norway 5 centuries ago (Espelien
2012), and is characterized by unique breed-deﬁning traits such as a great ﬂexibility of joints and neck as well as the presence of extra
toes in the fore and hind limbs (polydactyly; Park et al. 2008; Melis et al. 2013)."

"Y-chromosomal and mtDNA results of the “German” data set suggest that the current Lundehund population in Norway has 1
male and 1 female ancestor. Potentially, this observation only provides the minimum estimated number of male and female ancestors.
It is for example possible that several Lundehund males with identical Y-chromosomal haplotypes contributed. In addition, we only investigated
parts of the mt genome which could lead to an underestimation of the number of female founders as described ( Pang et al. 2009 )."

"According to our results, the Lundehund breed is an exceptional animal model for monogenic diseases such as polydactyly, which appears to be caused by the same intronic mutation in the preZRS of LMBR1 gene as in the Western dog breeds Beagle, Cocker Spaniel, Malinois, Rottweiler, Shetland Sheepdog, Standard Poodle, Standard Schnauzer, Shih Tzu, and Yorkshire Terrier (Park et al. 2008 ) ."