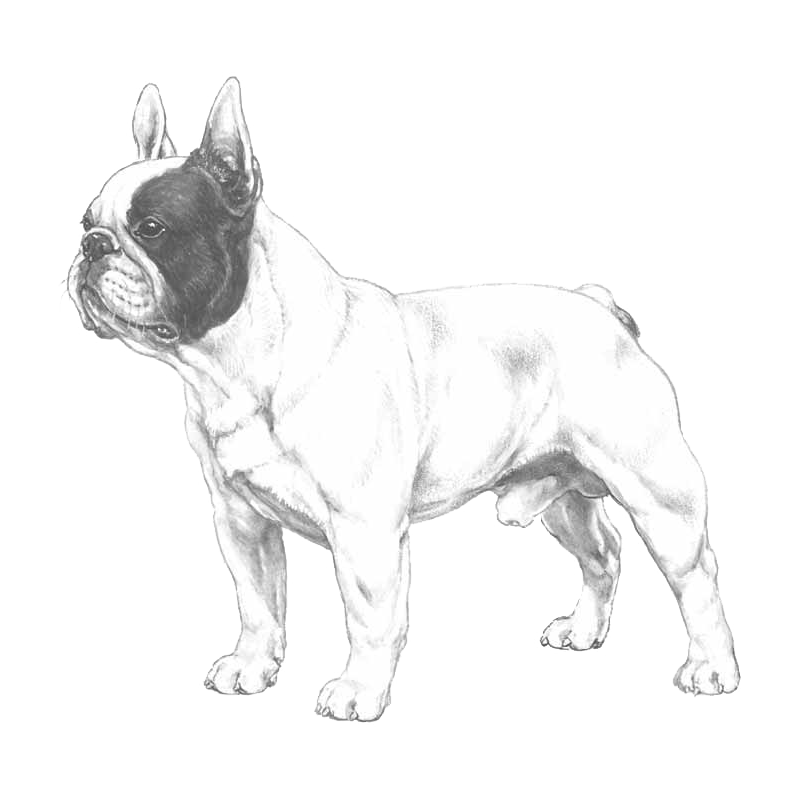 The French Bulldog is a small breed of domestic dog. "Frenchies" were the result in the 1800s of a cross between bulldog ancestors imported from England and local ratters in Paris (France).


Other Names for Breed
Country of Origin and Parent Breed Club

Get a GRIHP! on French Bulldogs

This article on French Bulldogs is part of a series to highlight the Big Picture of health, welfare and breeding. Concerns for the welfare of brachycephalic breeds, including the French Bulldog, have been the subject of much debate over the past several years. The popularity of French Bulldogs is undeniable; demand for this breed has soared over the past decade.  Supply and demand has led to production of pups by less than scrupulous breeders who are not operating under the umbrella or direction of KCs and Breed club health improvement program recommendations.

Extremes of conformation are recognized as contributing factors in development of health and welfare challenges.  French Bulldogs are short-muzzled dogs - the breed has historically exhibited short noses. But over time, incrementally shorter faces and heavier, shorter-backed body proportions (related to spinal abnormalities) have become an accepted norm in the breed. Extreme examples of some brachycephalic breeds go even further than the drift that has occurred in the conformation rings over the past 100 years into the realm of essentially deformed dogs with almost no muzzle, deformed jaws, no tails, unbalanced proportions and poor skeletal structure.  The catastrophic health problems associated with extreme conformations has been well documented.**

Health management and breeding strategies constructed by Kennel and Breed clubs are focused on identifying the prevalence of and effective methods to address key health concerns in the breed. In some cynological organizations Breed Standard wording has been clarified to minimize the acceptability of extreme traits.  In 2020 legislative action was taken by the Netherlands to regulate breeding of Brachycephalic breeds with the goal to enhance health and welfare. Additional legislative processes are underway in several other countries in Europe. Criteria for breeding outlined in the Dutch legislation involves the requirement to increase the ratio of length of muzzle to back skull (CFR).  The information in this article will assist all stakeholders to see the Big Picture - internationally - for the French Bulldog.  It should help the veterinary community to guide clients and to educate potential owners in determining whether a French Bulldog is the right breed for them. Sourcing of puppies from breeders who practice critical, rational, logical thinking about breeding decisions focused on health and welfare of the dogs produced and kept as companions is an important pre-purchase consideration for anyone with an interest in obtaining a French Bulldog. However, more than one research study has shown that people who are attracted to the appearance of Frenchies, do not prioritize health when they are acquiring one of these dogs, and, in spite of serious and costly veterinary care, as well as suffering for the dog and the owner, many indicate that they would purchase another one. Why do people choose the dogs they do - and what is the impact on dog health and welfare?

Check out the IPFD - WSAVA Meet the Breed article on French Bullldogs.

See our series of articles in the WSAVA Bulletin.

"We are the nerds" Dr. Anne Posthoff, the president of the German International Club for French Bulldogs, explains why the rules for breeding French Bulldogs in Germany are among the strictest in the world.

This breed has information on Veterinary Care and Life Insurance.

UK: Making the Most of Public Data: French Bulldogs in 2018
Authors: Cassandra Smith

Excerpt: "French Bulldog (Bouledogue francais) - brachycephalic and small molossoïd breed
The special conformation of this breed with shortened skull and overly short bridge of nose as well as underdeveloped tail, cause health problems if exaggerated further.
Areas of risk are:

Proportions and construction: Overly short proportions in neck and back as well as insufficient angulation in fore and hindquarters can       cause powerless dragging movement.

Look for sound breathing, correct bridge of nose, eyes, skin, tail and movement. Breed standard reads; "Length of muzzle about 1/6 of the total length of the head".
Gait should be free and active. The breed standard calls for an "active" dog which is "powerful for its small size, short, compact in all its proportions", but the French Bulldog must not be excessively short in neck and back."

9. Club du Bouledogue Français -- CBF ACTION FOR THE HEALTH AND WELL-BEING OF THE FRENCH BULLDOG -- CURRENT SITUATION AND PROSPECTS

Some things with dogs are just fun!

From the Finnish French Bulldog Association's annual meeting was held in Seinäjoki 03.17.2019 page a delightful video.

https://youtu.be/dj9SaFY6XmE (please note: you will need to go to YouTube to view this video - [French])

For further explanation of this research see the - Flyer

5. Demography and disorders of the French Bulldog population under primary veterinary care in the UK in 2013

Ownership of French Bulldogs in the UK is rising steeply. This means that the disorder profiles reported in this study reflect a current young UK population and are likely to shift as this cohort ages. Otitis externa, diarrhoea and conjunctivitis were the most common disorders in French Bulldogs. Identification of health priorities based on VetCompass™ data can support evidence–based reforms to improve health and welfare within the breed.

7. Breeding French bulldogs so that they breathe well—A long way to go