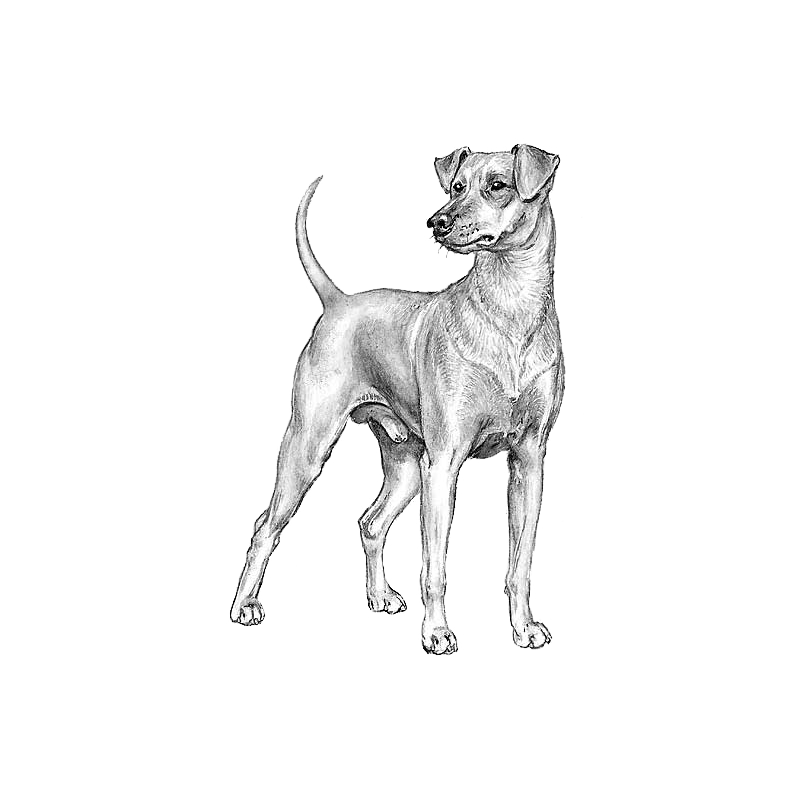 The German Pinscher is a medium-sized dog, usually weighing between 25–45 pounds (11–20 kilograms) and typically 17–20 inches (43–51 centimetres) in height, with a short coat. Colors for this breed include black and rust, red, fawn, blue and tan. The ideal German Pinscher is elegant in appearance with a strong square build and moderate body structure, muscular and powerful endurance and agility. For all countries where the Fédération Cynologique Internationale standard applies, only black and rust and solid red are allowed colors. Colors that became extinct during the world wars of the twentieth century include solid black, salt-and-pepper, and harlequin.
Source: https://en.wikipedia.org/wiki/German_Pinscher

See: The German Kennel Club (VDH) for information and video (if available).
(Hint: your browser should be able to Translate to English, at least for text (e.g., right click in Google Chrome or Internet Explorer).)
http://www.vdh.de/welpen/mein-welpe/deutscher-pinscher
Video (link - https://youtu.be/A5TKsMm2l6k):

This article contains an overview of the German Pinscher X Schnauzercrossbreeding project which was initially approved by the Finnish Kennel Club in 1996, including a Comparison between purebred and crossbred Pinschers in Finnish Mental Tests 2001-2015.

There are numerous breed standards. The basis of breed/conformation shows is the judging of pedigree dogs against the 'Breed Standard', which is a picture in words that describes the range of features that are deemed appropriate for the breed. Three of the major international standards are:

This document contains information on the worldwide population of German Pinschers as well as a thorough analysis of the breed's management in Finland and elsewhere.  Breeding objectives, health, temperament and working abilities are addressed providing exceptional insights into the nature of the German Pinscher breed and commitment to seeing to its welfare on the part of those who appreciate these dogs.  A MUST read for German Pinscher fanciers! Many thanks go to  Karoliina Suomalainen and Katariina Maki for sharing this outstanding translation with DogWellNet.

The Kennel Club list of DNA tests available for each breed along with an indication as to whether the test is part of the Assured Breeder Scheme (recommended or required) and whether it is recorded on the Kennel Club registration database: http://www.dogwellnet.com/content/_/health-and-breeding/screening-tests/dna/dna-tests-for-use-in-breeding-decisions/the-kennel-club-breed-specific-dna-tests-upd-r234