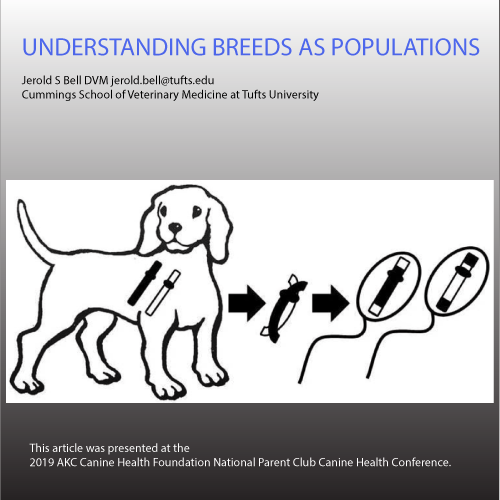 The article has been reprinted here with the written permission of the author.


This article was presented at the 2019 AKC Canine Health Foundation National Parent Club Canine Health Conference. It can be reprinted with the written permission of the author.


The same thing occurs in purebred dog populations. Dog breed populations are like early isolated human populations. The most common genetic diseases that are seen by veterinarians every day in practice are due to ancient liability genes that originated in ancestors that preceded the separation of breeds. They occur in both purebred and mixed breed dogs. These include allergies, hip dysplasia, heart disease, cruciate ligament disease, slipping kneecaps, cataracts, hereditary cancers and others. Breed-specific genetic disorders are due to more recent mutations. For many genetic disorders, validated genetic tests are available to identify carriers. For others, genetic screening and medical history differentiate normal from affected dogs.


BREED FORMATION & CHROMOSOMAL INHERITANCE
Breeds were formed by selecting for a working, behavioral and/or conformational standard. Dogs that did not adhere to a standard or were unhealthy were discarded. Those that did adhere were used for breeding. As only a small number of dogs are used to produce the next generation, rapid change can occur in the breed's genetic background. Dogs that embody and produce health and quality were considered superior to the standard and their offspring were used more frequently. Their genes were retained and propagated in the breed gene pool. Dogs that produced offspring that were unhealthy or inferior to a standard were not used. Their influence and that of their ancestors was diminished.


Dogs have 39 pairs of chromosomes – one in each pair from its sire and one from its dam. Dogs used for breeding supply one chromosome from each pair to every offspring. 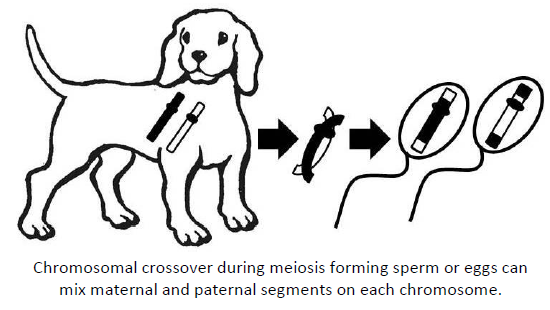 
Chromosomal crossover during meiosis forming sperm or eggs can mix maternal and paternal segments on each chromosome.


As ancestors and dogs who pass on positive traits to the breed are linebred on (appearing in both the sire and dam's sides of the pedigree) this can cause haplotype blocks to pair up - causing runs of homozygosity (ROH). Even without close linebreeding, selection for positive traits will increase their homozygosity having originated from distant ancestors. Breed-defining genes would be expected to be collected in runs of homozygosity due to selection over time.


Deleterious (primarily recessive) mutated genes can accumulate in the background of the breed gene pool. These accumulate primarily because they are not expressed in the heterozygous (carrier) state. Deleterious genes can increase in frequency if linked to positively selected genes, or through genetic drift. An increasing frequency of breed-related disease will be due to homozygosity of deleterious recessive or additive liability genes. Individual liability genes can cause embryonic death (thus resulting in smaller litter size or infertility), increased neonatal death, or breed-specific genetic disease. This is due to the expression of specific deleterious genes and not a general result of increased homozygosity.


If disease liability genes are linked in haplotype blocks to positively selected genes, then dogs that demonstrate the positive traits and do not carry the disease-liability genes should be selected for breeding. These dogs can occur due to phenocopies (selected traits due to other genetic causes), or due to meiotic chromosomal crossovers that break the linkage between the positive and disease-liability genes. If the positive and deleterious genes cannot be separated due to tight linkage (adjacent genes or even multiple effects of the same gene) then this is not a healthy breed standard. The standard may need to be changed, achieved through other selected genes or possibly through crossbreeding.


As breeds develop and reproduce to a standard, their genetic difference from other breeds increases. Runs of homozygosity for breed-defining traits and quality genes is a positive development, even though it results in a loss of genetic diversity from genes that do not reproduce a standard or maintain health. The genetic diversity between breeds is large. This is why pure breeds can be separated by their DNA signatures. Breed subgroups (conformation versus working or breed populations on different continents) can also be differentiated based on their DNA. This can provide an important source of breed genetic variation if needed. The genetic diversity within the breed should be small, so that the breed reproduces itself to a healthy standard. This is the “big picture” of genetic diversity in dog breeds.


DIFFERENCES BETWEEN BREEDS AND SPECIES
The force of species evolution is natural selection - the ability to thrive and reproduce within the species’ environment. Artificial selection that could be detrimental to species survival is not an issue in the wild. Genetic isolation can create subspecies (often with multiple isolation events) and can cause random genetic changes due to genetic drift.


Species survival plans (SSPs) were developed by population geneticists working with rare and endangered species who have a limited number of available breedable individuals. With the assumption that avoidance of homozygosity of deleterious recessive genes provides for the healthiest and robust offspring, SSPs are designed to mate the most unrelated individuals together (through pedigree or molecular genetic markers). This hopefully limits the expression of recessive disease-causing genes. SSPs also work to maintain the breadth of genetic diversity (evaluating the rareness or commonness of genetic background) in the species population. The only individual selection in SSP systems is to not breed unhealthy animals. However, if an unhealthy animal represents a unique genetic background it could still be used in matings to maintain genetic diversity. The goal of an SSP is successful reproduction with the production of healthy, live offspring representing the diverse background of the species.


Purebred breeding requires constant (artificial) selection for positive traits including health, and against negative traits and disorders. Without constant selection for specific breeding goals and their associated genes, the health and quality of the offspring will decline. The ability of selective pressure to create change in the population is limited by the amount of variation that is present for the selected trait in the breed. Selecting for heterozygosity as a goal and mating the least related parents together, erases the differences between dogs in the breed that are required for selection. This limits the ability to apply selective pressure for improvement. As a breeder selects for more goals in any mating, the amount of selective pressure for each individual goal diminishes. I.e., it is easier and more productive to select for one to three goals at one time than for eight or nine goals. Any selective pressure (selection goal) that is not specifically directed toward health and quality will diminish the selective pressure for both.


SSP breeding systems are not appropriate for pure breeds. Only outbreeding for the most heterozygous dogs randomizes the positive and deleterious genes in the gene pool. Breed-specific genetic disorders are caused by liability genes that are already dispersed in the breed’s gene pool. Outbreeding will not decrease the frequency of these genes in the population. The clinical occurrence and frequency of such disorders will not diminish based on outbreeding versus linebreeding. The disorder will just appear randomly in offspring from different matings. Outbreeding and linebreeding are tools, not goals. There are specific reasons for using either in planned matings.


IMPROVING BREED POPULATION HEALTH THROUGH HEALTH CONSCIOUS BREEDING
Purebred dog breeds were developed through artificial selection when dedicated breeders judiciously purged dogs and their genes from the breed gene pools if they were unhealthy or did not perform to a standard. Somewhere along the way, the responsibility to select for health and produce healthy offspring disappeared from dog breeding. Today, people just breed dogs and expect healthy offspring.


In the planning of any proposed mating, the selection of healthy parents is paramount to the health of the offspring. A pre-breeding health examination includes phenotypic examination of the major organ systems for; musculoskeletal, cardiac, ophthalmologic, gastrointestinal, pulmonary, dermatologic and behavioral abnormalities. Medical history should be examined for episodic inherited disease that cannot be identified on examination; i.e., allergies, seizures, bloat, bladder stones, cruciate ligament disease, etc. Dogs demonstrating hereditary disease should be selected against for breeding.


Pure breeds can also have breed-specific genetic disease due to more recent mutations. For many of these there are breed-validated genetic tests that can identify causative or disease liability genes, or genetic screening to identify affected dogs. The OFA Canine Health Information Center (www.ofa.org) and the AKC Bred With H.E.A.R.T. program (http://www.akc.org/breeder-programs/akc-bred-with-heart-program/) both have breed-specific genetic testing requirements that have been determined by the parent breed club. All prospective breeding dogs should undergo a veterinary pre-breeding health assessment that covers screening and medical history evaluation for all common and breed-related genetic disorders. If all breeders include pre-breeding genetic screening in mate selection, then America’s dogs will be healthier.


The advent of multiplex genetic panel testing (Mars Wisdom Health, Embark, etc.) provides genetic test results for over 180 canine traits and disorders. Unfortunately, most of the disease liability genes tested for in these panels are breed specific. Unless the gene(s) have been validated to cause clinical disease in other breeds or mixed breeds, the test result may not have any significance in your dog. In addition, the panel tests utilize SNPs (single nucleotide changes) instead of testing for a mutation, so false positive and negative results can occur. Breeding decisions regarding breed-validated liability genes should be based on direct mutation and not SNP testing.


Typical genetic counseling recommendations utilize the breeding of quality carriers to non-carrier dogs and replacing the carrier parent with a quality non-carrier offspring. In this way breeding lines (and breed genetic diversity) are not abandoned and testable disease liability genes can be lost in one generation. If a valid genetic test is not available then selection should be based on genetic screening and open health databases that identify relative risk of carrying disease liability genes.


Health conscious breeders are fulfilling their ethical responsibilities to produce healthier dogs. If a breeder is not willing or able to provide official health screening results for the parents of litters, then BUYER BEWARE! There will be no expectation of genetic health in the puppies. Without evidence of pre-breeding genetic screening, health guarantees that provide for a replacement of a family member once the emotional bonds have been made are worthless. It is only a piece of paper written to excuse a breeder from performing their ethical responsibility of pre-breeding health screening.


There are many conversations concerning issues with dog breeding in America. Many people prefer the predictable characteristics of purebred dogs. The “Adopt, Don’t Shop” movement promotes rescuing a dog from a shelter instead of buying from a breeder. The fact is that there isn’t even a fraction of rescue dogs available to provide canine companionship to America’s families. This has created the “bred for rescue” industry. Dogs will continue to be bred so that they can be our faithful companions. If any purebred or mixed-breed mating is being planned, health-conscious breeding through pre-breeding health examination, genetic screening and genetic testing should be performed. If the public demands health-conscious breeding then the issue of genetic disease in dogs will change.


“All dogs deserve to live healthy lives.” William J. Feeney, Chairman of the AKC Board of Directors.