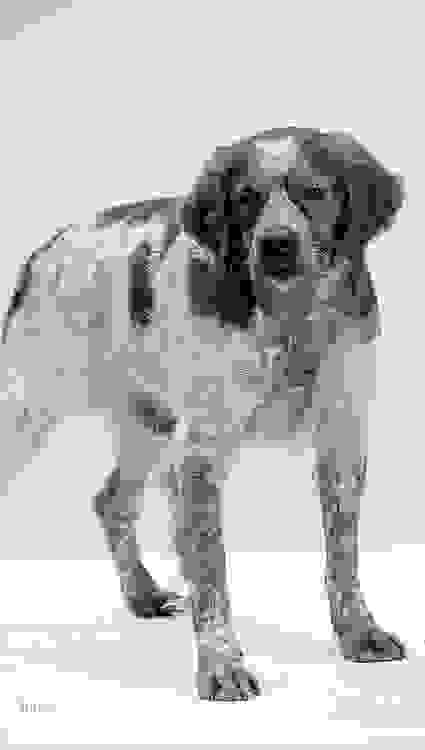 It the previous post, we have seen the parameters to be taken into account for the establishment of a breeding strategy. It does however not say which measure should be taken in what circumstance, which is not surprising given the number of factors involved. A few general guidelines however exists such as the ones developed by Animal Health Trust, the problem being that each situation is rather unique.

The “What If” procedure: In 2012, we developed a method to assess the potential impact of breeding strategies in simple cases, considering the genealogy specific to a given population (Leroy and Rognon 2012). The principle of the procedure is to investigate “what” would have happen “if” a given breeding strategy had been applied a few years earlier, considering that the impacts would be similar if the strategy would be applied nowadays. In that purpose, we simulated the segregation of an allele a (representing the deleterious allele involved in a monogenic recessive disorders) within the genealogies of the breed until a time t, corresponding to the implementation of the breeding strategies. From time t, genealogies were modified, with some parents removed from reproductions and replaced by reproducers used the same year. Different strategies were tested considering, the mutation identified and each reproducers tested, with the following scenarios:

The impact on genetic variability was assessed through the evolution of average genealogical coancestries (ɸ) either observed on real genealogies, or modified under the different scenarios. The average coancestry (also called kinship) corresponds to the basal inbreeding of the population, the coefficient of inbreeding of a given individual corresponding to the coancestry between its parents. 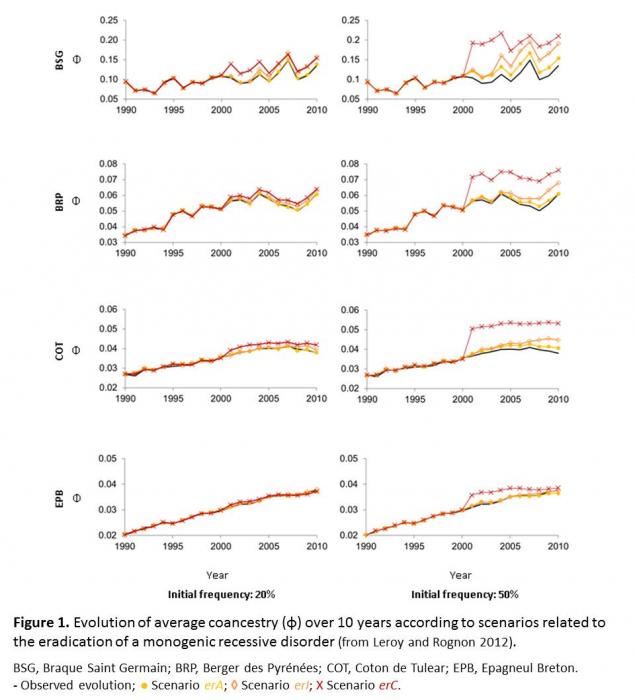 The figure 1 illustrates quite well the contrast that a given breeding strategy may have according to the incidence of the disease and to the demographic situation of the breed. For instance, in the Epagneul Breton breed, the different breeding strategies did not impact much the genetic variability (with exception of scenario erC with allele frequency around 50%). By contrast, the impacts were more important for breeds with lower population size. Also genetic variability was much more impacted by the different breeding strategy when the disease incidence was high, and for example, implementing erC strategies (i.e. removing of all carriers) with allele frequency around 50% would have doubled the coancestry, i.e. the basal inbreeding, within Braque Saint German breed. 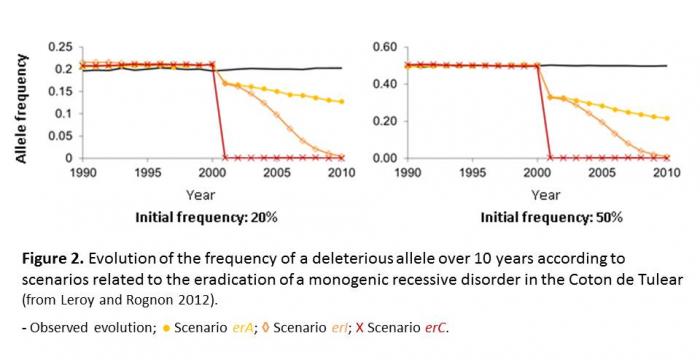 Of course, as illustrated by the figure 2, the time taken to reduce the allele frequency of the deleterious allele differs across strategies (it is however equivalent across breeds), and while the direct removal of carriers (erC) allow a prompt elimination of the disease, limiting the strategy to the removal of homozygous affected individuals (erA) will have only limited effects over time, intermediate policy (erI) allowing the elimination of the disease over a 10 years period.

These examples illustrate clearly the fact that strategies should be defined according to the situation of each population. While in small populations, the removal of carriers from reproduction should be avoided unless the incidence of the disease is very low, such strategy can be implemented in large populations of the size of Epagneul Breton without affecting too much its genetic variability, if the frequency of the deleterious allele is not to high (under 20%). Of course, it is important to remember, this diagnosis tool is based on a number of simplifications. For instance, it does not take into account the selection made by the breeders in reaction to the disease (even if some variants have been tested within the article). Nevertheless, it may provide a diagnosis specific to each breed having enough pedigree information. The tool could probably be adapted to some more complex situations, considering more complex inheritance mode or coexistence of two different diseases.

In the future, other initiatives could help breeders and clubs to design their breeding strategies. Especially, the sharing of experience and case studies on DogWellNet would allow a better assessment of the efficiency of available measures.