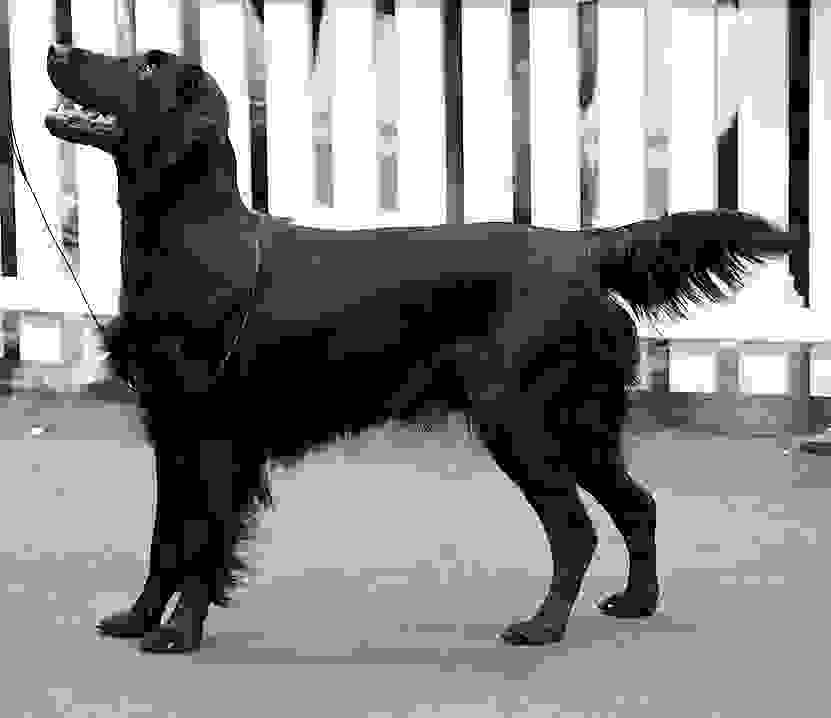 When considering implementation of breeding strategies in relation to health of welfare, breed associations and Kennel clubs constitute the first actors susceptible to implement adequate actions. There are however multiple problems in the implementation of efficient strategies, including the fact that, even once efficient clinic or genetic diagnosis have been developed for a specific disease, clubs often don’t know how to proceed then. Efficiency and potential side effects may indeed be difficult to assess, while some choices maybe considered as unpopular, and therefore rejected by breeders. Moreover, in some case, national legislation does not permit the implementation of specific action.

However, when thinking about it, there is a large diversity of initiatives that can be implemented by clubs to promote the health of their breeds, with specific advantages and limits. In the following table, I tried to list some examples, considering those actions can be sorted according to the fact they are based on restrictions on the use of reproducers, promotion of healthy dogs, or information provided to owners and breeders. 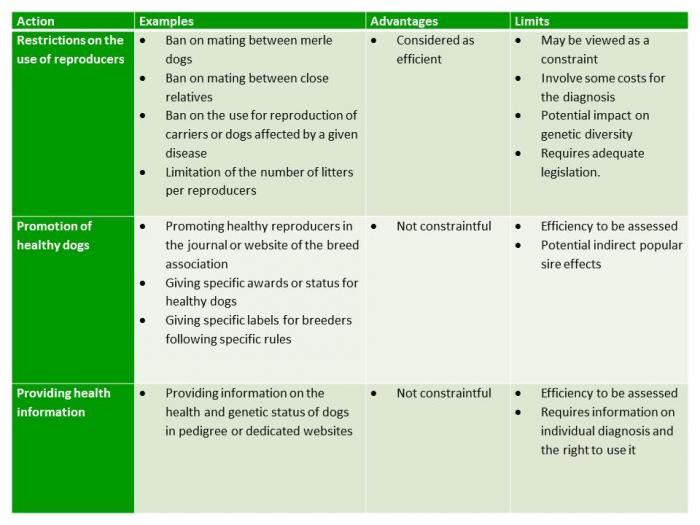 The first categories of actions are related to constraints or incentive that can be set to limit the use of dogs that can be deleterious to the health of the breed (note those dogs can be healthy by themselves but carriers of deleterious defects), and promote on contrary healthy dogs. Restrictive measures aiming at banning some dogs from reproduction, or some specific mating, are probably the most evident. Classically it may be decided, for a specific disease, that only non-affected or non-carrier dogs may reproduce. Also, the fact that mating between merle dogs is forbidden in numerous countries relates to this kind of measure. Such measures have the advantage of efficiency, as they may unsure that no product will be affected by the targeted condition (or eventually carry it). A major drawback is that they can be viewed as more or less constraintful by breeders. This is why, before their implementation, it is important to communicate clearly the reason why such action is taken. Note that in some countries, as in France for instance (as well as in USA from what I know?), it is, in theory, not allowed to ban a dog from reproduction.

It can be also decided, as a variant, that to obtain a given award, dogs must be non-affected or non-carriers. In France for example, several clubs impose restriction on health status for the title of national champion. Such measures have the advantage to be less binding; they will be probably also less efficient.

Finally, Clubs can also decide to reward dogs with healthy status or breeders putting effort on breed health, by promoting them in their website for instance. Of course, the efficiency of those measure depend largely if the reward as some impact in term of reproduction. On the other hand, it is also important to assess the consequence of a given measure on breed diversity and health. The constraints and incentive should not restrict the number of reproducers to a few sire or dams, otherwise it could led to the opposite effect to the desired one (see this previous note for more information).

When there is a given health problem within a dog breed, a classical reflex is sometime to hide the problem and make as everything was ok, while the best thing to do should be to take action before it’s too late. Similarly for health strategy, an interesting option should be provide information to owners and breeders on the diseases and health and dogs to allow them to make the best choices. Of course, this requires to have access to the information, as well as the right to use it.

Despite the potential constraint that may exist for breeding strategy implementation, given the diversity of potential actions that can be taken for health improvement, there should be not excuse for immobility. If Breed clubs want to remain legitimate stakeholders in dog breeding, they have to take their responsibility and act to the best of their ability to insure a future to dog health and welfare.