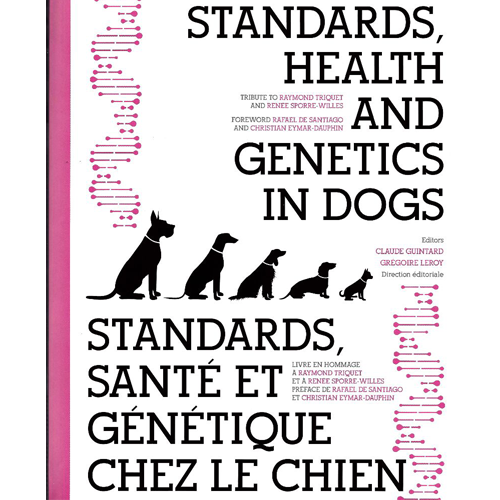 Here we feature a text entitled Standards, health and hypertypes in dogs, by Pr. José Luis Payró Dueñas (Mexico) from the book,  Standards, Health and Genetics in the Dog. ( Read more about the book here. )

Veterinarian, Professor and President of the Americas and Caribbean Section of Fédération Cynologique Internationale, Pr. José Luis Payró Dueñas discusses brachycephalic traits, and other morphologies that impact function of purebred dog breeds. Brachycephalic breed traits and management are covered in some depth.

In the writing Pr. José Luis Payró Dueñas outlines steps breeders adopt to achieve effective selective breeding.  Dog breeder's evaluations of breeding dogs based on their and breed judge's interpretations of the Breed Standard,  breeder evaluations of dogs' pedigrees and their knowledge of the heritability of observable traits that contribute to disease or health are explored.

..."poor interpretation of the standards can cause a breeder to produce specimens with hypertypes or with deformations that will remain concentrated in the breed, producing hereditary diseases. When evaluating a dog, the judge values the effort and the production of every exhibitor whose aim must not just be the pride of winning, but the goal of fixing the type by not selecting those specimens with the hypertypes that are not desired in the breed."

Seeing to health and welfare of dogs is judges' and breeders' responsibility - correct construction and interpretation of breed standards is essential.

See the complete text in English.

See the complete text in French.

It is of great importance for dog breeders to properly interpret the breed standard, since it is the base upon which dogs are selected for reproduction and these animals will pass their characteristics on to their offspring, be they desirable or not. When dogs are poorly selected for breeding, some pathological cases may occur including hereditary diseases and hypertypes. Selecting the right dogs to be used for breeding is done by means of correctly interpreting the breed standard, paying attention to the pedigree (parents, grandparents, great-grandparents), the phenotype of the animals, ensuring that the standard is respected, and guaranteeing not only the beauty of the dogs, but also their health, their zootechnical function and their welfare. All of this is essential in reproducing various breeds of dogs and it also explains why breeders, veterinarians and cynological institutions worldwide such as the Federation Cynologique Internationale (FCI) work together as a team.


"Phenotypic selection applied by breeders in the selection of different dog breeds for their physical improvement or behavior, uses the breed standards or breeding procedures as guides.

These guides describe certain physical characteristics as conforming to the breed’s typical beauty.

However, sometimes a misinterpretation of the standard on the part of the breeders provokes the appearance of different hereditary diseases, genetic malformations or hypertypes, which are the consequence of indirect selection.

These problems are then incorporated into the bloodline through different crosses and by breeding affected specimens.

Undesirable characteristics can be passed on, which can be dominant or recessive, they can be detrimental to the breed and  its health, such as the brachycephalic syndrome  which  can be  considered as a group of symptoms which characterize a disease or an abnormal condition.

Examples of these abnormalities which can occur in certain individuals are broad and square skull shape, a short muzzle, flat face, rounded and wrinkled cheeks, short nose, medium, round, sunken or protruding eyes, etc.

Some examples of breeds that present these conditions are the Bulldog, the French Bulldog, Pekingese, Pug, Shih Tzu, Lhasa Apso, Sharpei, Boston Terrier, Neapolitan Mastiff and Bull Mastiff, to name but a few.

This skull shape causes a series of detrimental effects on the dog’s health, causing respiratory problems such as obstructive congenital disease of the upper respiratory tract, stenosis of the nares with severe tightening of the nostrils, cleft or elongated soft palate which extends towards the back part of the larynx and can partially block the respiratory tract, or the eversion of the laryngeal saccules that increase the effort the dog needs to make when breathing in, due to the stenotic nares and to the elongated soft palate; the saccules that normally hang forwards are stuck against the respiratory tract which restricts the air flow further, provoking laryngeal collapse in the dog.

The reduction of the diameter of the trachea can vary according to each of the previously mentioned breeds or can be due to one or more of these abnormalities that increase difficulty in breathing, due to the enlargement of the respiratory tract and that more effort is needed when the dog inhales.

Other abnormalities of the respiratory tract can exist in all these breeds, such as inflammation or edema of the larynx and pharyngitis. Also, an eversion of the tonsils can occur, causing a collapse of the epiglottis.

As a consequence of all these abnormalities, dogs of these breeds suffer from a wide variety of additional signs, such as difficult and extremely noisy breathing with an intolerance to walking or exercise, with reflux, coughing, sneezing, cyanosis, tracheal collapse and a greater susceptibility to heat stroke. In addition they frequently have difficulty swallowing. All these respiratory abnormalities are associated with anatomical problems (hypertypes). In addition to these respiratory problems they can also suffer from gastrointestinal problems, which can cause vomiting, regurgitation, esophageal diversion, pyloric stenosis, functional anomalies of the cardial atony, duodenal-gastric reflux, extremely pronounced gastritis, and even death. But besides all these respiratory problems caused by the cranial anatomy that the breeders look for as the ideal prototype of each one of these breeds because they have wrongly interpreted the breed standard, dogs can additionally present many other undesirable deformations such as sunken eyes, entropion or ectropion and wrinkles on the face and on the body, with multiple pyodermas that provoke parasitic diseases of the skin. Another of the most frequent affections in the said breeds with prognathous jaws is that they can present malformations in the alignment of the incisors of the upper jaw or of the longest jaw, causing the dog to be unable to close its mouth and thus sticking its tongue out. Other effects are tooth loss, gingival hyperplasia, bad occlusion causing deficiencies in cutting and crushing food, overbite, and underbite which causes injuries to the hard palate.

Dogs with bodies which are too short or too long, high croup, over angulated front or hind legs or rounded thorax commonly present secondary pathologies associated with their anatomical shape, such as hemivertebrae, cleft spine/Spina Bifida, lumbosacral instability, supernumerary vertebrae, kneecap dislocation, Wobbler's Syndrome, coxo-femoral joint dysplasia, elbow dysplasia, ulna and radius dysplasia, hemiplegia and quadriplegia. All of this affects how each individual walks.

The problems that are often observed in many breeds are due to the whims of the breeders to obtain uncommon and showy colors that lead to the presentation of pathologies such as deafness, blindness, albinism, atopies, alopecia or excess of coat, epidermal dysplasia, as well as serious reproductive problems and bad temperament to mention but a few.

The main aim of dog shows is for breeders to be able to compare their dogs with other dogs of the same breed, in order to improve them, controlling the quality of every breed, preserving the purity and at the same time guaranteeing the well-being and the health of every dog.

For the breeder, the results of judging in an exhibition mark the evaluation of his effort and at the same time the value of his production, using the breed standards as model. As we previously mentioned, the poor interpretation of the standards can cause a breeder to produce specimens with hypertypes or with deformations that will remain concentrated in the breed, producing hereditary diseases . When evaluating a dog, the judge values the effort and the production of every exhibitor whose aim must not just be the pride of winning, but the goal of fixing the type by not selecting those specimens with the hypertypes that are not desired in the breed. Because of this, the judge has the responsibility in dog shows of rewarding exclusively those dogs that stick to the breed standard, always trying to guarantee the health and the well-being of each one of the dogs as is considered in all the official breed standards of the Fédération Cynologique Internationale (FCI)."

Breed characteristics, especially those reflecting extreme conformations may represent potential health or welfare concerns. In attempt to address such issues, some Kennel Clubs have instituted programs aimed at detecting dogs with health issues and/or not rewarding conformation shows. Two examples are: