Breed Standards are valuable tools for defining, maintaining and preserving purebred dog breed's distinct type and purpose. Interpretation of conformation points described by the language used in Breed Standards is much debated among serious breed fanciers and judges. Recently comments have been made regarding the need to review and change the Breed Standards for some breeds with the aim of clarifying 'ideal' characteristics described, particularly with a mind to the Breed Standard's wording and its relationship to breed health and welfare.

Preservation of a breed's cherished qualities rides on breeders' understanding and interpretation of the breed standard and real world application of choosing mating pairs likely to produce offspring that favorably 'measure up' to the ideal specimen described in the Breed Standard - including producing a dog fit for purpose and function.


A few issues to consider...

We cannot ignore the fact that a percentage of purebred dogs are bred by breeders who operate outside the major dog club systems and registries (the very systems responsible for creating and revising Breed Standards); the dogs are sold to buyers who do not participate in dog club activities. Breeders, puppy buyers and dog owners who are not involved in showing dogs in conformation, not involved in working and performance activities with dogs or committed to doing club recommended health testing may or may not be interested in interpreting the grosser or finer points of the Breed Standard. Breeders inside the dog club systems have spent considerable time and made investment in breeding programs built on producing dogs that adhere to the Breed Standard.  A question one must ask is: do members of the general public take the time to read or understand the content in a breed standard before purchase of a purebred dog? The answer to that question is: no, not many. (See the UK Report, Radical Transparency for figures; look at the section covering Supply of Puppies.)

The snub-nosed brachycephalic Breed Standards have been questioned perhaps more than any other Standards with calls made by health professionals for “Brachy’ standards to include language to lengthen muzzles or alter skulls. Breathing problems have been shown to be associated with certain shorter muzzled head shapes. Shorter muzzles are one component of breed type conformation identified as contributing to Brachycephalic Obstructive Airway Syndrome (BOAS) - but research has shown there are other aspects of the dogs' conformation which contribute development of BOAS as well. 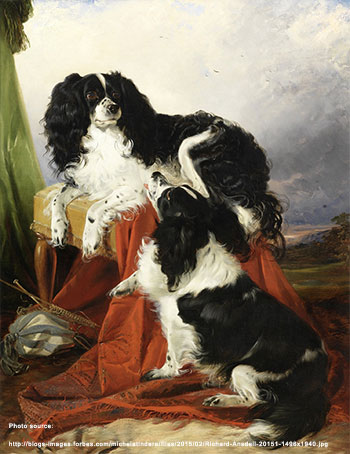 Development of Chiari-like Malformation and Syringomyelia in the Cavalier King Charles Spaniel may be associated with certain head shapes; but is the 'offending' head shape described in the CKCS Breed Standard and were these health conditions present early on in the breed's development? Looking to the history of breed type and changes to head shape which have occurred incrementally over decades of time informs. 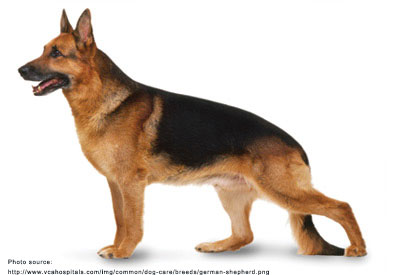 No description written in any section of a Breed Standard should threaten the well-being and quality of life of members of the breed described. In 2009 The Kennel Club initiated a review of all Breed Standards to ensure none contained language demanding "any feature which could prevent a dog from breathing, walking and seeing freely." * See the article: '*Maintaining the Breed', Author: Frank Kane.

In August of 2016 The Kennel Club updated the UK German Shepherd Breed Standard under the Characteristics heading. The change is highlighted and underlined.

Versatile working dog, balanced and free from exaggeration. Must be capable of standing comfortably and calmly, freely and unsupported in any way, in structural balance, whilst both rear pasterns are vertical. Attentive, alert, resilient and tireless with keen scenting ability.

This revision is more about defining methods of handling and presentation in the show ring than about altering language used to describe actual conformation; the verbiage used in the revision is supported in other passages of the GSD Breed Standard.

AKC standards are different from FCI standards in model/structure. The same can be said for The Kennel Club Breed Standards which differ in structure from FCI Standards and AKC Standards. Is it any wonder there is some confusion as to interpretation of Breed Standard's content by breeders and judges as the breeding and showing of dogs increasingly crosses over country borders and oceans? Is it any wonder that owner and breeder focus and reasons for keeping dogs has an effect on their choices of 'types' of dogs that fit best with individual goals? Selecting a dog with companionship qualities to fit lifestyle, the need for a dog with specific working capabilities and perceived beauty rests in the eye of the beholder. Breed Standards do not exist in a vacuum - they are interpreted and applied as breeders, judges, and even the public, sees fit.

It is important to recognize who owns the Breed Standard for a given breed. Many Kennel and Breed Club's objectives are to keep Breed Standards as closely aligned to the Breed's country of origin standards as possible. This is not always the case.

"A revision consists of any change, deletion, interpretation, or clarification to a standard. Once the Board of Directors has approved a standard there is a five year moratorium on revisions.”

Additional AKC rules and procedures applicable to Breed Standards creation and revisions are available at:

Excerpt… “The experts of the breed will choose the items they think fit and observe the order of the model.”

FCI does not write Standards. Breed standards for each breed are written by the Breed Club experts in a breed’s country of origin. Like AKC, FCI approves the Breed Standards.

"Today the guardianship of the breed standards is entrusted to the Breed Standards and Stud Book Sub Committee, comprised of experts from each of the seven groups (hounds, toys, pastoral, utility, terriers, working and gundogs) and a veterinary surgeon with canine specialism. The work entails the reviewing of existing standards, often at the request of breed clubs, the writing of breed standards for breeds newly recognised in this country, and they also consider applications for breeds which are not recognised in the UK from people who have imported them."

What all is involved in changing a Breed Standard?


Those proposing a 'simple' solution to 'change the standard' with the aim to 'improve' health or alter any other aspect of a breed's description must consider the complexity of a breed club/kennel club doing that and take into account the time frame in which such an endeavor might occur. Consideration must be given to possible impacts a revision to a Breed Standard might have - intended or unintentional - for better or worse.

Complexities at the breed club/kennel club level include:

Determining if there is motivation and/or a legitimate reason to change, followed by identifying and engaging available and competent personnel to aid in:

2. handling technical and procedural aspects of the undertaking and

3. establishing effective communication strategies to involve all stakeholders in the decision-making process.

Time frame. One - two years, at a minimum, might be a reasonable expectation for completing the process of revising a Breed Standard. Breed Standard revisions taking 3 or more years is not uncommon. A two year time frame would apply to making changes that did not significantly challenge one or more stakeholder groups. Significant challenges could delay or derail the revision. Of course seeing positive results from making a change in a Breed Standard might take a decade or more and involve several generations of dogs - if the change was universally accepted by breeders and dogs acceptable to the fancy at large were available on which Breed Standard changes could form a foundation.

At the end of all of the 'Change the Breed Standard' talk and whether or not changes are made to Breed Standards, we come to a better understanding of how to address dealing with important conformation aspects present in purebred dog breeds. We are left with the thought that providing the public, breeders and judges with opportunities to educate themselves will impact the health and welfare of breeds and individual dogs.

IPFD's Partners and Sponsors are committed to improving health and welfare in dogs.

We thank the breed clubs and dog organizations who have joined us to provide helpful breed-specific content for use on DogWellNet.