Our colleagues at Human Behaviour Change for Animals (HBC) posted an interesting article today.  The original paper is:

The Responsible Dog Owner: The Construction of Responsibility from Carri Westgarth and others at the University of Liverpool, UK. The research article is published here.

Their key message is:

While “responsible dog ownership” has considerable appeal as a concept, how it is perceived and interpreted varies so extensively

that simply telling owners that they should “be responsible” is of limited use as a message to promote behavior change.

In other words, many owners consider the dog a member of the family and themselves as caretakers.  Based on their feelings, they think they are giving great care to their beloved pet.  Of course, veterinarians, other dog owners and breeders are aware of many examples of irresponsible or at least inappropriate care provided by well-meaning owners.  One of the most obvious examples is obesity. 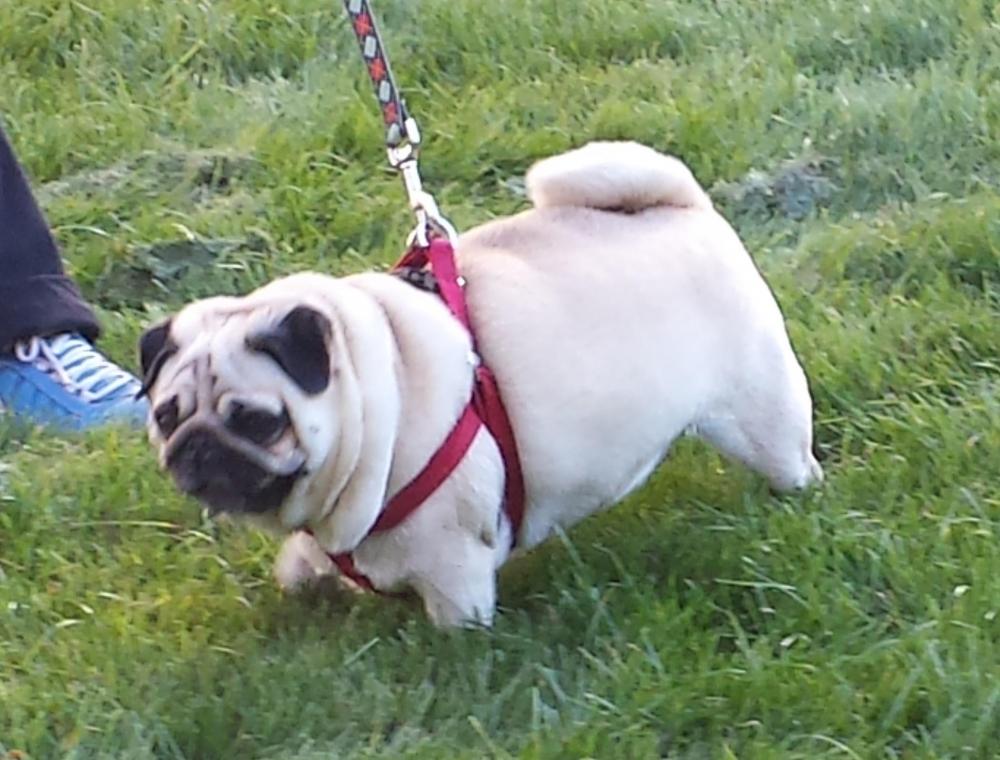 I took this photo of a pug in a park in Chicago, with the owner's permission.  In conversation it was obvious that she was extremely attached to this dog, thought she was wonderful, told me the dog was so important in her life, and she no doubt thought I wanted a photo because the dog was so cute.  I am sure  my readers will know that was not my first impression.  This dog's obesity was startling.  When I touched the dog, my hands literally sank into depths of fat.  Even worse, this was a brachycephalic dog and she grunted and snuffled, and I have no doubt her breathing was compromised and I could only imagine her inability to cope on hot days. Here was a clear example of an owner felt she was giving loving - responsible - care, and I was hard pressed not to tell her that this dog's condition could be viewed as quite the opposite, in fact, tantamount to animal abuse.  I also know that this woman would have been devastated to hear that. In these situations I always ponder whether our first responsibility is to the owner or to the dog...

Behaviour problems also are often examples of inadequate or inappropriate care.  It is very common to hear owners say 'my dog has separation anxiety' as if it was an inherited condition - so sad, but there it is.  When in fact, the owner - if they have had the dog since it was a pup - carries the primary responsibility for creating or not preventing that behaviour in the dog.

The HBC post linked us to a short review of the research article here The problem with promoting 'responsible dog ownership.  Their key summary points:

a new report suggests. Dog owners interviewed for a study all considered themselves to be responsible owners,

despite there being great variation in key aspects of their dog-owning behavior.

We have had discussions at the 4th International Dog Health Workshop (IDHW) by our colleagues at HBC and since.  It is clear that many issues related to dog health and welfare, supply and demand, and even genetic testing and its use in best breeding practices are affected by communication, education and understanding, as much as science and evidence.

You can read more about this in Tamzin Furtado's presentation at the 4th IDHW:  Canine Welfare - The Human Element - Human Behaviour Change for Animals.

Other talks in the Supply and Demand theme at the 4th IDHW also addressed owner issues and understanding about sources of dogs and, really, responsible dog acquisition.  Several of the proposed actions from this theme also relate to communication.

I addressed some of the challenges of communication about genetic testing in my blog:  AKC-CHF SYMPOSIUM: Harmonization of Genetic Testing and Breed-Specific Resources.

We all understand that human-dog interactions are at the core of everything that happens with the animals we love.  Focus on the impacts, barriers and effective promoters from the human side must be considered in all recommendations and decisions about their health, well-being and welfare.