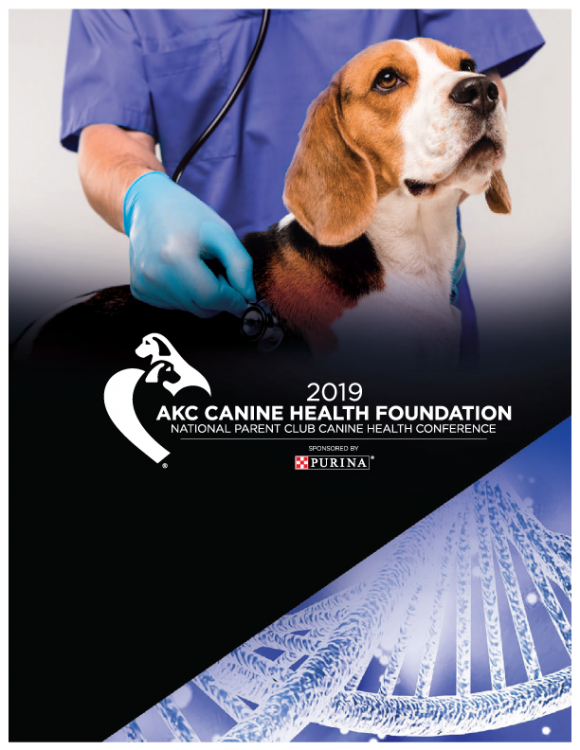 I was honoured to again be invited to speak at the 2019 AKC Canine Health Foundation National Parent Club Canine Health Conference August 9-11 in St. Louis, Missouri.

This is a great event that brings together breed club health committee members, other interested breeders, stellar researchers, and others from the dog community.

There was a broad coverage of CHF sponsored research topics, as well as a definite focus on genetics and genetic testing, reflecting the continued need for information and support for the dog community on these issues.

In addition to lectures, there were two panel discussions which allowed attendees to ask questions of the scientists.  The first was on Saturday afternoon.  I gave my talk on Sunday, and that session was also followed by a panel discussion.

A pdf copy of my talk, with post-talk notes, is attached: BONNETT CHF Harmonization of Genetic Testing and Breed Specific Resources 11Aug2019_with notes.pdf

As I note in this document, I heard a lot of frustration from those asking questions, and others who approached me over the weekend.  As I said to all of them, "It is not surprising that you are confused and frustrated... the world of genetic testing IS confusing and frustrating!".  Although many exciting developments in genetic research were presented over the weekend, and other talks focused on application of testing, there were few if any simple, yes/no, black and white answers.  'Genetics' underlies all life in our universe, is the basis of all evolution... it is not now, nor will it ever be, simple, uncomplicated and, perhaps, never really fully understood.  Even while we are struggling to get a hold on the appropriate use of the many tests available for single-gene disorders, some researchers are moving ahead on diseases with a more complex inheritance.  And even now the research world is moving more and more into whole-genome sequencing, which may be available at a reasonable price within a couple of years.  And then what?  We will know more and more about the genetic makeup of individuals and breeds.  But will we have the detailed information needed on the meaning of all these results?  The key information for properly integrating genetic testing into best breeding practices?  Probably not.  As is the current situation, the technology will likely advance faster that our ability to deal with it in a practical sense.  And, for all the potential good, there are significant risks to applying tests in the face of insufficient clinical/population-based information.  This same situation is also arising in human medicine; a topic I touched on in my recent talk at the American Veterinary Medical Association meeting.

Leigh-Anne Clark from Clemson University gave a great talk on risk across the various combinations of a three genes associated with dermatomyositis - combinations which highlighted the added complexity of multi-gene disorders. (see abstract: pg. 68) Her work also showed the kind of explicit risk percentages that are needed to really understand the results from genetic testing.  We recently posted on Facebook a link to a video of a previous talk Dr. Clark gave which is well worth viewing.

Another recurring challenge brought up by attendees involved breed clubs' frustrations in communicating health strategies to their members and in achieving compliance with recommendations.  I mention in my talks 'Decision making by Facebook'.  Unfortunately, the latter drives a lot of the focus for many in kennel and breed clubs.  Several clubs brought up instances where rare diseases, or diseases with unknown importance in their breed, were being pushed forward to have a genetic testing strategy, sometimes taking emphasis away from common, known, important conditions in the breed.  Several of the experts recommended not basing testing strategies for such condition just because a test was available, but rather looking at the big picture of health in the breed.  It became quite clear that many of breed club's frustrations stem not from a lack of research or information or having complex information, but on an inability to effect behaviour change in their members through traditional channels of education.

This was a common theme at the IDHW as well and we brought in experts on Human Behaviour Change for Animals to educate us.  I personally think that learning how to communicate more effectively is desperately needed.

All these concerns and experiences underlie IPFD's work on improving and expanding the tools needed to deal with genetic testing and health strategies in breeds.  See my talk from the CHF meeting for information on the latest work on the Harmonization of Genetic Testing for Dogs (HGTD),  a coming development, the  Health Strategies Database for Dogs that will catalog all conditions in breeds (not just those for which there are genetic tests based on identified health issues from breed clubs, kennel clubs, and others worldwide.  We are starting a project in Golden Retrievers as a prototype of our Get a GRIHP! tool to pull all relevant information together for a breed.

It is so wonderful to meet with those people so passionate about health in their breeds.

Thanks to AKC-CHF and all the attendees for a great experience.